Jimmy Deemer
Get in contact with Jimmy Deemer via email at jimmyd@apevibro.com.

Harkers Island North Carolina is attached to the main land by a small 1/2 mile long bridge. The only electric power that is brought to the island is by means of an older out dated power pole system 200 feet away from the bridge. The currrent poles are aprox. 30 feet long. Some time ago some of the main poles were damaged by a water spout. The power company knew it was time for a much needed update on this system. They decided to install 54″ dia. concrete cylinder piles 56 feet in length for the new poles foundations and use poles 85 feeet in length that are un-guyed. They called “Taylor Brothers Marine” of Beauford North Carolina. TBM knew this was not an off the shelf type job. TBM contacted APE Mid-Atlantic of Virginia Beach, Virginia. APE ‘s engineers reviewed the soils data & job specfications and put togeather an APE D62-42 diesel impact hammer with hydraulic trip / start in a special offshore leader just for driving 54″ cylinder piles. This could’nt have gone any smoother than it did, talk about the right tool for the right job said Julias Taylor & Julias Taylor the 3rd.Why would a contractor use anyone but APE! APE wishes TBM a safe & productive project. Do you have a difficult upcomming job? or any upcomming job, if so contact your nearest APE branch to see what they can do for you……………. GO APE! 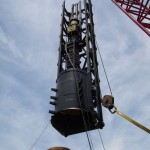 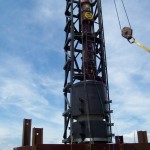 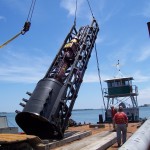 APE News
Get in contact with APE News via email at news@apevibro.com.

Many years ago APE introduced the Junttan Pile Driving Rig into the USA. It was a very difficult venture because the rig was very expensive. In addition, Junttan’s delivery schedule was more than one year. APE sold one rig to Picone and one to Jet Drive, both New York contractors. There were many issues with parts and service and getting things through customs.

APE’s agreement with Junttan excluded APE from selling to Skanska Companies. The agreement became too restricted plus Junttan wanted to sell direct so we parted ways a few years ago. APE still maintains a fleet of Junttan hydraulic hammers. For the record I want to say that Junttan builds a very nice rig. We are proud to say that we played a very large part of introducing their technology to the USA. We learned from Junttan and they learned from APE.

APE set out to design its own rig with the best features from both the Junttan and ABI rigs. We wanted capacity but we also wanted our leader system to pivot on the rig. We joined forces with Nippon and in 2008 we introduced the first APE rig. Here it is driving 4000 pipe piles in Florida.

The APE rig can drive longer piles than ABI’s rig. The APE rig mast can pivot sideways unlike the fixed mast Junttan rig. APE can fit the rig with a low headroom APE hydraulic hammer or a vibro as shown or a diesel hammer. APE considers this rig to be superior to the Junttan or ABI rigs. APE is in the process of putting one rig in each APE branch. So far we have rigs in Florida and New Jersey. Texas will get the third rig.

For more information please contact Jim Casavant at the APE Florida branch or on his cell at 863-660-8716.