On Sunday, May 15th 2011, at 5pm the world’s largest vibratory hammer drove the world’s largest pile in 7 and a half minutes! American Piledriving Equipment, Inc with cooperation with First Harbor Engineering Communications Bureau drove the first pile for the East island for the Hong Kong-Zhuhai-Macau Bridge. The first pile was 72 feet in diameter, 131 feet tall, and 500 US tons. The first pile took about 3 hours to place into the exact correct position. The difficultly level of the placement was due to the fact that not only did the pile need to be in the exact correct GPS location, it also needed to be face the correct degree to line up the interlocks on each side of the pile. Later this week the first 37 foot wide shell-pile-walls will be driven in between two of the 72 foot diameter piles. Tensions were very high for the last week as many preparations were needed to get ready for Sunday’s main event. Over 40 top engineers participated in the coordinating of the driving procedure. Everybody was separated into many different teams with a total of 60 people involved directly to making sure the first pile drove successfully.

In addition, most of the top engineers for the bridge project, safety administration, environmental protection agencies, government officials, and top level engineers from the China Construction Communications Bureau came to watch the first pile go into the ground. Over 8 boats and 3 ships were in the vicinity to witness the historic operation. Number 3 marine also had a sand-pile-ship nearby that moved closer to allow for more people to stand and watch. Over 200 people came to see the first pile be driven. Prior to the drive many fireworks were lit off on all the surrounding boats and ships including a ship owned by competitor Number 3 Marine Bureau to wish the project luck.

Jerry Cors (Production manager for APE and the Octa-Kong) myself (MD of APE China and technical lead for the Octa-Kong and Shell-pile-wall project) , Mr. Yang Yun Fu (APE China’s engineer) , Mr. Derek Hu (APE China’s assembly manager) , and Steve Gough (International sales for APE USA and head of China sales) were present to run the machine and verify all went smooth. It was a sight to see and I hope to post more information about the project on the APE CHINA website, including a video of the operation (www.apevibro.cn). I have also made the APE China site in both Chinese and English for better communication. Congratulations to all who were involved! and Congratulations to APE USA.

I want to give a special thank you to everybody who worked on this project and made this day possible. 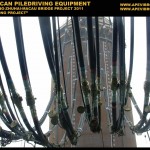 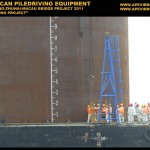 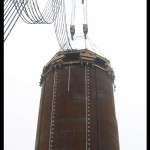 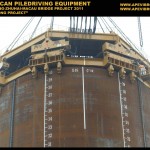 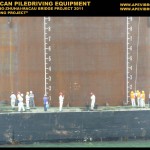 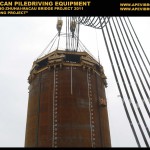 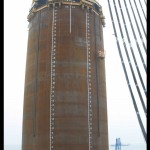 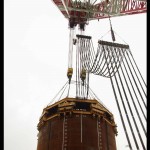 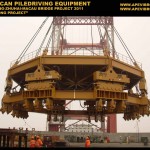 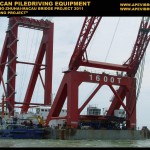 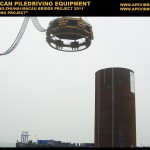 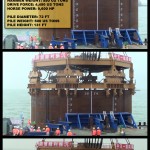 There are 1 Comments to "APE Drives the World’s Largest Pile!"