On December 8th 2011, the APE “OctaKong” hammer drove it’s final pile to grade in front of a crowd of 200 people on the South China Sea.  Many Engineers, officials, contractors, and China T.V. Stations came to witness the final pile drive to grade.  In total, 120 piles were used to create the east and west man-made islands for the HongKong-Zhuhai-Macau bridge project.  The largest pile was 72 feet in diameter, 180 feet high, and 660 US tons.  The entire project lasted just under 7 months, an incredibly fast time to make two full island foundations.  ZPMC, the Shanghai based company who fabricated the piles, could hardly keep up pile production with the driving speed of the project.  At the fastest point the OctaKong drove 6 piles in 3 days.  One of the biggest challenges of the East island was learning how to drive 72 foot diameter piles in complex soil conditions.  When driving large diameter piles the soil conditions on one side of the pile can be very different than on the other side of the pile.  At some points the right side of the pile was facing N47+ soil while the left side only saw only N15.  Soil layers are not flat, which is not usually not a problem when driving small diameter piles, but when faced with super large piles often times one full side of the pile will cut through a soil layer for 10 feet before the other side of the pile hits the same layer.  This creates a big challenge when trying to get the pile to go into the soil perfectly straight.  These new challenges forced us to learn a new pile driving method specific to large diameter piles.  No doubt a huge step for the pile driving industry for the future of even larger bridges, land reclamation, and wind power.

It was a surreal feeling to watch the last pile go into the ground after nearly 2 years of research and planning.   As the pile reached it’s final feet many surrounding boats launched fireworks and large cheering could be heard as soon as the machine was shut off.  It’s not very common in Chinese culture to see grown business men and engineers hugging and shouting, but as the OctaKong drove it’s last few feet I think it sent overwhelming joy throughout everybody who’s worked on the project, including myself.  The timeline for this project was so tight that tensions were high for the last 7 months.  I think everybody knew that if the OctaKong hammer broke for whatever reason the entire project had no chance to finish on time, and with no backup hammer, APE China felt the heat to make sure the project kept going smoothly.  I’m glad to report that the OctaKong hammer never had even one day of downtime, something our APE team should be very proud of.  The APE 200-6 tandem special is driving the final 37 foot shell-pile-walls over the next week and that project should conclude soon as well.  Thank you to everybody who worked so hard on this project!

We are working on a 30 minute documentary for this project with some pretty amazing video and pictures.  Please stay tuned for that to be released soon!

Should you have any specific questions about this project, I invite you to e-mail me or call at anytime.  Phone: 206-422-2475  E-mail: davidw@apevibro.com 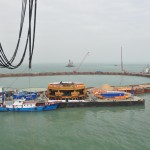 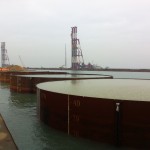 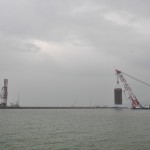 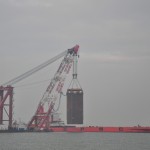 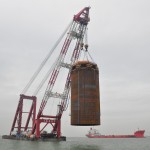 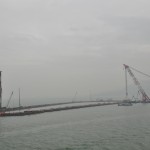 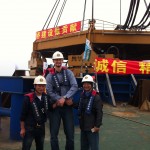 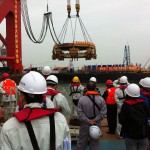 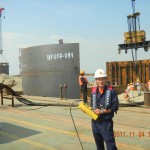 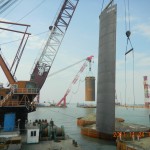 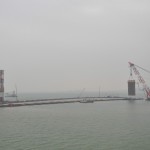 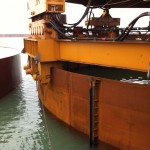 There are 1 Comments to "Final 72′ Pile Driven to Grade, OctaKong Project Finished"