APE China (Shanghai ZhenLi) has sent it’s first model 400 hammer that was built in China to a job in FuJian province.  The customer had difficult soil conditions with thick clay layers at the top.  They were originally considering excavating out the top layers but when they heard about the APE 400 they decided to give it a try.  Suspense was in the air as many doubted the 400 could drive the 36″ X 72′ long pile to grade, many were utterly convinced the 400 hammer would not be able to drive to the pile all the way down.  After the hammer was lifted on the pile some fireworks were let off to set to scare away the evil spirits, as custom in China, 18 minutes later the pile was to grade!  This marks a milestone for APE China and it’s ability to continue to provide the largest hydraulic vibratory hammers to the China market along with local service and manufacturing.  A 1200 HP engine powers the 400 with option to use 1050HP on easier jobs.  APE China made equipment is only for the Asia pacific region while Kent,WA manufactures for the USA and Europe.  Go APE! 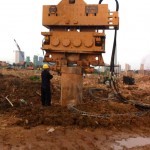 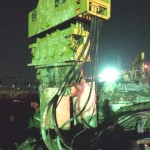 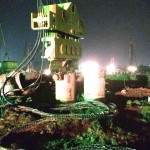 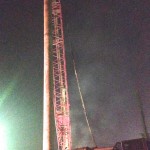