Jimmy Deemer
Get in contact with Jimmy Deemer via email at jimmyd@apevibro.com.

Hurricane Irene came up the east coast and made a big mess at the shinning star of North Carolina……………The Outer Banks. This long strip of barrier islands is one of the biggest summer playgrounds on the east coast, but lately it’s also become a magnet for “Nor east storms” and hurricanes. One of the hardest hit areas is the region south of Oregon Inlet. It has become common for the water to rise up on highway 12 and wash large areas of it away.

Hurricane Irene was no different. Just about the time the winds & rain had left the area the residents & the NCDOT had seen the damage, a very large area of the only road in & out was gone and mother nature had blessed the Outer banks with a new inlet. “Carolina Bridge” from Orangeburg SC got the call to come and look and see what could be done ASAP to re-open this stretch of road. Richard Nickel, Operations Manager of Carolina Bridge met with the NCDOT and they decided to bridge the gap with a temporary bridge until a permanent fix could be designed and agreed upon.

The NCDOT contracted Carolina Bridge to install some large sheet pile containment cells at both ends of the bridge as well as aprox. 90 ea. 24” x 70’ steel pipe piles to support the temporary bridge. The crews will be working 24/7 2 shifts until the road re-opens Richard contacted Jimmy Deemer of APE Mid-Atlantic in Virginia Beach VA. And they determined an APE model 200 vibratory hammer and an APE D-30-42 diesel hammer would be a good choice to meet the criteria that was needed to support the new bridge.

Carolina Bridge is currently driving the piles to with in 5’-10 feet of grade with the APE 200 vibro hammer, and finishing / proving them with the APE D-30-42 diesel hammer, all is going very smooth. APE wishes Carolina Bridge a safe and productive job, we know they have their work cut out for them! Contact your nearest APE branch for all of your piledriving & foundation equipment needs, APE is the largest manufacture & provider of equipment in the world! Visit us on the web……..www.apevibro.com and see just what APE can do for you & your current or upcoming job. GO APE ! 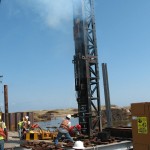 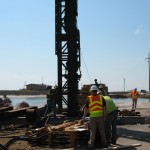 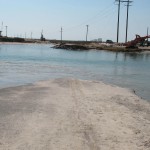 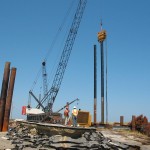 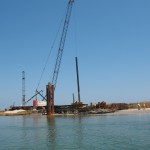 APE Proves to be the Best – PTC 60 HD Falls Short

As Arq. Andres Rivera had suspected and experienced in the 1st major expansion Grupo Indi succesfully completed at The Port of Lazaro Cardenas back in 2005; the soil conditions were unpredictably tough.

Due to it’s geographical location (between the river and the Atlantic Ocean), the soils consist of thick layers of fine sands combined with cohesive clays, gravel, and boulders.

Their PTC 60 HD was working at maximum capacity and  still could not drive or extract the 1.6m diameter, 3/4” wall, 18m long temporary sleeves used to contain the soils.

Due to lack of capacity of their 150 ton crane and limited weight restriction on the platforms it stand, getting a bigger vibro was not an option.

They needed a similar size vibro with more driving force and extra pulling force able to withstand the use and abuse of this difficult soils.

Luckily, Arq. Rivera had already heard about THE YELLOW APE that had been taking over the territory of Mexico, annihilating the competition one job at a time.

After carefully considering and experiencing the challenges at the jobsite, our expert piledriving engineers decided to send a modified APE 200-6 with an 1050 HP Power Unit able to put out 2200 rpm @ 5000 psi for an approximate frequency of 1750 cpm, which in turn put out as much as 287 tons of driving force and 167 tons of pulling force. Now the PTC 60HD lies on the floor looking @ at THE YELLOW APE work its ass off…

How does APE make a similar size vibro put out almost double the driving force and double the extraction force?

It takes years and years of innovation, engineering, and patented technology.

Now, Arq. Andrés Rivera is confident he will finish his project on time for Mexico’s President Felipe Calderón to come inaugurate on October 31st what will be the Port handling more TEUS of all Mexico. GO APE! KEEP IT COMING GRUPO INDI! 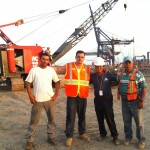 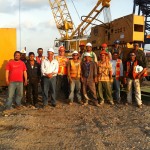 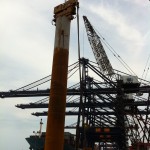 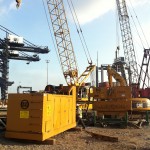 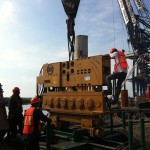