APE was given the opportunity to present at DFI’s 2012 Superpile on the benefits, challenges and complexities of driving large diameter piles. The presentation was given by David White, the Managing Director of APE China. Along with Steve Gough, the APE China team and APE Corporate team, we all made the foundation work of Hong Kong-Zhuhai-Macau Bridge a reality. They worked tirelessly to design, negotiate and deliver the “OctaKong”, the largest Vibratory Driver Extractor to ever be seen on planet earth.

David White wrote an article back in December detailing the role that APE and our team played in constructing the foundation for the reclaimed islands of the bridge, this was after the final pile had been driven. During the process we have written several more articles with details on the construction of the bridge and APE’s continued involvement. We look forward to what future projects will bring with the benefits seen through the use of large diameter piles.

Below are the links to all of the articles we have written over the past year on the OctaKong and the Hong Kong-Zhuhai-Macau Bridge: 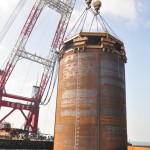 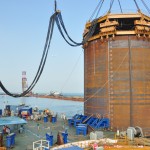 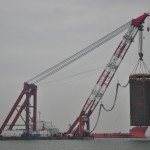 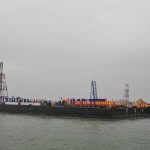 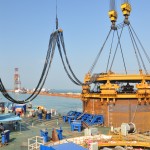 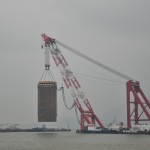 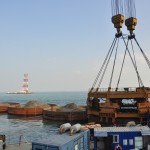 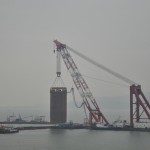 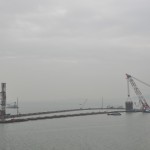 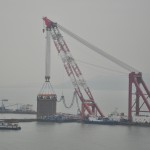 San Francisco, The City by the Bay

San Francisco, the city by the bay. California is steadily rebuilding some of its world renown monuments. Pier 19 located in San Francisco California is one of them. The rebuilding of pier 19 has been long overdue with tourism still in full swing with cruise ships coming and going out of the port. After the demoltion of the pier, the first order of things is, of course, the foundation.

Seen here, Power Engineering of Northern California is antalling 72” diameter steel pipe pile 160’ long with a 1” wall thickness. Driving these steel casings wasn’t going to be easy with all the restrictions enforced on the job. Tight work space with little room to manuever and all the regulations involved made this job a chelleng. So when they decided to take on the job, they called APE to get the equipment they needed. With the tough Merrit Sands and the sticky Bay Mud here in the bay, they chose the APE 600 Vibro to do the job. And of course the 600 vibro wouldn’t let them down, it got the pile down! 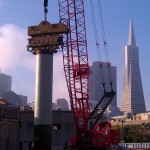 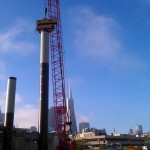 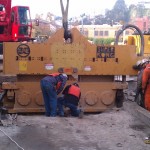 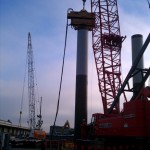 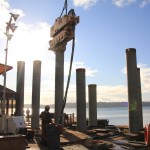 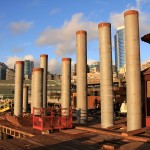 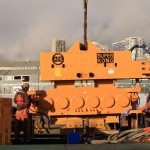 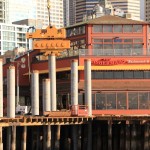 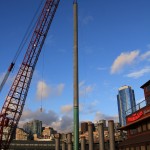 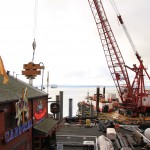 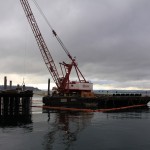 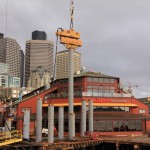