APE Shows Up the Competition Right in Their Back Yard

DeWitt Construction- a long time loyalist to APE, rented a D62 impact hammer package from APE NW to proof some piling for the Army Corps of Engineers. DeWitt was driving about 200 of the 18″ & 24″ -3/8″ wall pipe piles. First they used their Vulcan air hammer with a set of fixed leads to start the piling, but once they realized they needed some more “bang for their buck”, they new exactly who to call. In the end, we got a nice rental- Awesome! Even better though, is the fact that this jobsite was less than a five minute drive North of the competiton’s yard! Needless to say, we had to capitalize on this. So, Josh Greisen and myself loaded up the camera and some t-shirts and took off to visit the jobsite. Check out the video and pictures below! 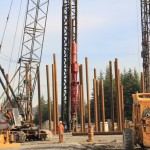 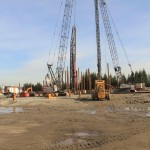 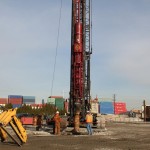 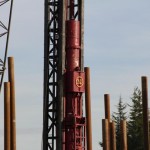 Vice Construction had a job with Alabama Power where pulling in a crane on the job site with a vibratory hammer wouldn’t be possible. So APE teamed up with Erickson Air Crane to come up with a solution that has worked in the past, a Flying APE 150 Vibratory Hammer! The location was a tough squeeze and there were times the team was driving the cans within a hundred feet from peoples homes. The helicopter had to work at a “higher” than normal altitude due to the fact that the clearing tract for the job was not wide enough for the helicopter to work in, so needless to say the air crane had to remain above the tree line.

You can imagine the pilot had his work cut out for him; the longer the line, the more difficult it will be to maneuver. The piles were 48 inch (3/8 wall) and up to 48 feet long. Piles were driven the week after thanksgiving. On Monday, November 29th the job site had some of the worst weather of the year. Tornado warnings, storms, wind, rain, we were not able  fly unfortunately. The APE 150 finished its job Friday. Once we found the groove, things went smooth (As smooth as one can go with a 9000 h.p. helicopter overhead churning up 100 m.p.h. winds below). 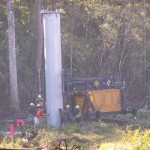 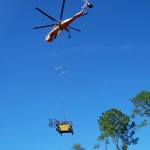 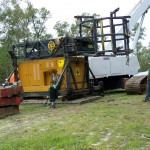 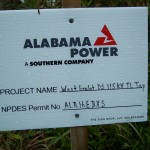 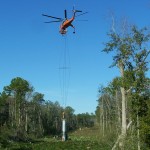 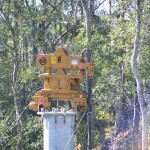 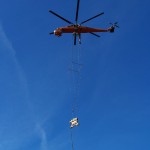 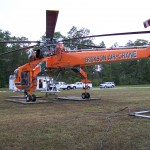 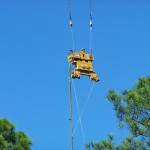