Hitting the Mark with the 100K Drill

Dewitt Construction had few big holes to drill in Hillsboro OR.  Holes were 30” diameter and 85’ deep.  The 100K drill was just coming out of production and this was a perfect place to put this newly designed drill.  This project in Hillsboro was in one of the INTEL facilities, and was very difficult for myself and Scotto Gray, one of the designers for this Drill, to get on site for an equipment evaluation.  Speaking from experience, it is not every day you walk onto a job site with a “prototype” piece of foundation equipment and the super intendant says, with a look a complete satisfaction in his eye, “don’t change a thing, this has got to be the best drill I have ever used”.

So we watched the drill work for a couple of hours, everything going just like clockwork.  And as the drill approached the 40’ mark Jeff, the Super on site described the material from 45’ to 85’ as a very stiff clay, resembling “bay mud” as Jeff described it.  This material was so sticky and heavy that it would not carry itself up the flight, they would take 10’ bites and bring the flight out of the hole and have to remove it with a mini-excavator.  The drill has been running in APE 37 inch U leads which the customer liked so well they are buying this set of leads. There were 60 holes drilled and the 5 inch grouting system was used to pump grout at pressures averaging 1000-1500 psi. 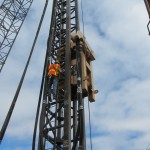 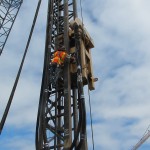