The APE 200-6 was recently rented to an experienced customer in HaiKou to drive double “Z” shaped sheet piles for a new dock project. Convincing new customers in China that APE equipment is of the highest quality available is never easy. Many years of competition in the market selling fake products, low quality products, and terrible service has left most contractors extremely weary to trust anybody. Even as a Tall 2.1 meter tall white speaking foreigner in China, it is not enough to fully convince contractors that our product and service is far beyond anything they have experienced in the past. This particular customer has either purchased or rented at some point every single vibratory hammer in China available from electric to hydraulic and local to import. Due to the extreme success of the “Octa-Kong” project for the HongKong-Macao-Bridge project to drive 22m (72 feet) diameter piles he decided to give us a chance. He figured that if we can drive 22m (72 foot) diameter piles we should be able to drive sheet piles. 24 hours prior to us receiving a down payment for a few months rent he received all call from our competitor saying he was making a grave mistake to rent our hammer to him and APE hammers would absolutely not succeed in driving the sheet piles to grade.

Our customer called me on the phone and said he was extremely disturbed by the call. Dan Collins and John White has told APE CHINA several times to rent our hammer for free if we have to prove to the market that we have the best product. I told the customer we would return 100% of the money if our hammer didn’t drive the sheet piles. He was so moved by what I said he said he would send 100% of the money within 20 minutes, he did without any extra modification to the contract. After the hammer arrived on the job site our service man Mr. Liu discovered that all of our engine oil from our Cummins 700 HP engine was gone. We all remember quite clearly doing a full service check of the machine prior to shipment and were shocked to discover that all of the engine oil was mysteriously gone after the first night on the job site. Mr. Liu, being the excellent service man he his, checked all fluid levels prior to initial startup of the power unit of the drive pump lube oil level, hydraulic oil level, radiator fluid level, diesel fuel level, and thank goodness the engine oil level.

After a wasted half day of replacing the engine oil, which we paid for, the hammer finally had the chance to prove it could work. The hammer ended up doing extremely well on the site driving 15 to 20 piles per day easily. Our customer was so happy with our service he wrote a full-page hand written thank you letter to our service man Mr. Liu and to APE for the excellent service given on the job site and high performance of the hammer.  We are extremely happy to represent a product we all believe in, there’s nothing better than selling a product that you know is going to work. Go APE! 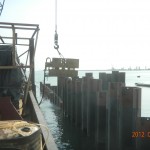 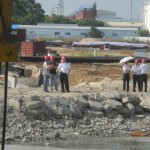 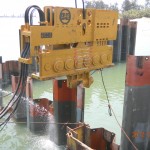 The 170VM has driven 1000 sheets since it first started working. The new APE concrete clamp kicks bud! APE China response time to send new set of jaws was only 3 days! Impressive!!! Thank you David White and APE China staff for making it happen. For more details on the Cabo Riviera project see my first article from back in November of 2011 http://www.apevibro.com/wordpress/2011/11/01/ape-170vm-has-been-spotted-in-los-cabos/. 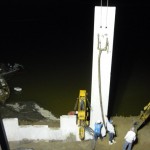 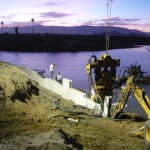 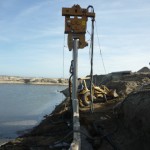 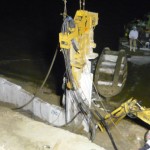 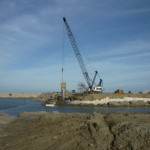 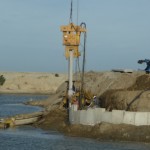 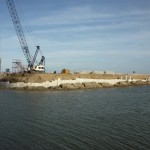 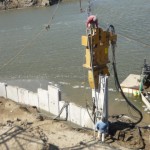 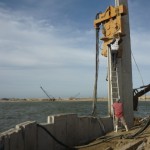 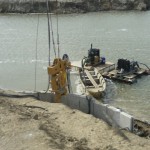 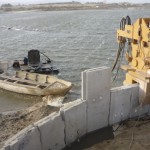 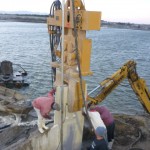 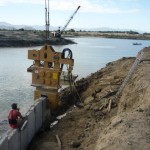 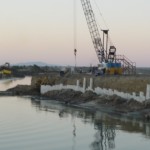 APE in the Amazon Jungle!

Jim Casavant
Get in contact with Jim Casavant via email at jimc@apevibro.com.

Costa Fortuna has taken delivery of  new APE 200T with a 700 HP Power unit for use in the town of Almerim, Brazil on the Amazon River. Our long time Customer is driving 800 and 1200 mm Pipe Pile for Electric Transmission Tower bases, the overall height of the Towers will be 280 meters.

The Pipe Pile are 48 meters long and are driven to 150 ton capacity with some Pile testing over 360 tons. The Pile are started with the APE 200T / 700 and finished with a APE D50-42 Diesel Hammer, in some cases the pile are taken almost to grade and then set checked with the D50-42 to prove Bearing Capacity.

Michele Corda the Equipment Manager for Costa Fortuna was very impressed with the patented APE  two – stage suppressor Housing and it’s ability to dampen Vibration back to their new Liebherr Crane. While using their much older Foster 4150 Vibro the Crane computer would shut down due to the excessive Vibration from the old style Suppressor, not only did that shut down problem stop with the APE 200T but it also outdrove the heavier 4150 with ease at much lower fuel use. 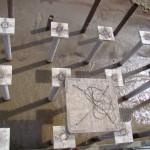 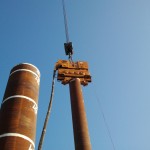 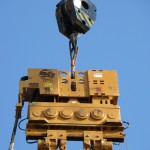 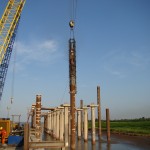